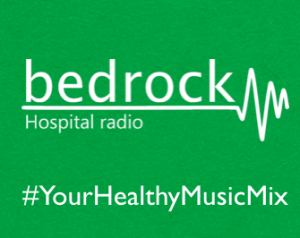 I always find that volunteering at Bedrock has presented a range of new challenges, and the last few months have given us a new one…. A merger! Bedrock has expanded, and it’s all gone rather smoothly.

I’ll be honest and say a lot of the work was done by delegation, having the correct people talking to one-another. That is how any organisation should work really. The right people, sorting the right items.
So as of April 2016, Goodmayes Hospital Radio (Jumbo Sound) is now Bedrock.

We’ve got the next project to come may bank holiday – refurbishment of the studios.
(Yes Queen’s gets another refit – This one is FOR GOOD!)

Bedrock, the health & hospital radio service is to take over broadcasting from The Jumbo Sound (Goodmayes Hospital Radio Association (GHR))
The Jumbo Sound had recently celebrated it’s 40th anniversary in 2015 and soon after suffered major equipment damage, caused by a burst radiator flooding their studio forcing the station off-air. For several years volunteer numbers dropped as did income. As insurers evaluated the cost of damage, The Jumbo Sound (GHR) voted to merge into neighbouring station Bedrock, Queen’s Hospital, Romford.

The merger will see Bedrock Radio provide programmes to the Goodmayes area as early as April 2016.Mathew Watson, Chairman, Bedrock commented: “I appreciate the team at GHR/The Jumbo Sound made a very difficult decision to merge. We welcome their volunteers to Bedrock and look forward to sharing ideas, meanwhile we are working tirelessly to repair the studios to reintroduce live & local programmes to Goodmayes Hospital & it’s health community’

Goodmayes Hospital Radio Association was founded in 1977, in 2006 the station adopted ‘The Jumbo Sound’ as it’s on-air name to modernise the station and attract new volunteers. The studios are still located in the old Goodmayes hospital building, but provide a full broadcasting service to patients receiving treatment under North East London Foundation Trust (NELFT).

Marj Young, Chair of Jumbo Sound: “Our studio equipment was becoming unreliable, and our membership numbers dwindled making it difficult to fill our programme schedule and raise funds. I would personally like to thank everyone involved with Goodmayes Hospital Radio from the 70s through to the remaining members who have struggled to keep the station running, we have every confidence that Bedrock can take the station forward successfully.”

Lee Howe, Engineer for Both Bedrock & Jumbo Sound said, “There is a lot of work ahead to re-build a studio at Goodmayes, but the merge with Bedrock will see an increase in programmes. Utilising the latest technologies available, we will be able to provide shows that are either presented specifically to each hospital, or shared between both”

Bedrock formed in 2002 as a merge between Oldchruch & Harold Wood Hospital Radio’s in preparation for the opening of Queen’s Hospital (2006), Bedrock is built upon a 52 year heritage from it’s founding stations. The station calls itself a ‘health and hospital’ station focusing on both in-patient entertainment while keeping outpatients, staff & local community informed of heath related matters.

We are Bedrock Radio, Your Healthy Music Mix.