I attended my first Hospital Broadcasting Association (HBA) Conference & AGM earlier this year, in Newcastle.
It was an experience, with the opportunity to visit another studio, see the trade show and hear what the HBA is doing.
Myself and Lee (Bedrock Engineer) decided to take a chance and attended – As a little extra, we also took a portable studio along to record our programmes (our hotel had free, stable wifi) so we made it sound like were broadcasting live! – Impressive for us!

Before we event went to the conference. I’ve been looking at Hospital Radio in general and seeing a mass transition into streaming online, with some stations applying for community radio licences from OFCOM, and even a couple of station applying for the DAB trials.

Even at Bedrock we launched an online service as part of a further plan to expand to King George Hospital and reach outpatients. I still believe it could expand further than this, possibility a community licence, but with the focus of ‘health and wellbeing’ the Trust we work with should utilise us as a Communication tool, local health related charities too, in return they should encourage listening to the station, in a nutshell, hospital radio, becomes community health radio.

One of the first seminars we attend was on the future of Hospital radio, exploring it’s changing landscape.
As mentioned earlier, I had the vision that a form of ‘Community Heath’ broadcasting, it turns out I wasn’t alone. The panel of stations from England, Wales, Scotland, and a Hospital station that had flipped to Community.
There where a few trains of thought, but for me the ones that stood out where:

Even with a community (external) target, the focus would still be primary in-hosptial, with requests & patient interaction, promoting hospital services. So the end of the first seminar it was food for thought, but started to confirm my ideas I had in mind to progress our stations.

The trade show provided an opportunity to see what we could do next with the studios.
Lee and I took the opportunity to have a chat with PSquared about Myriad, as we had a few questions and problems.
It was great to see they bought along a Sonifex S2 mixer as they offer studio packages. I’ve always been fond of the S2 mixer, but they require a £6000 investment, plus we would need to buy new desks to fit them. My plan would be to upgrade to one in a few years, should things develop at Bedrock.

At this point, we had missed the start times of the next seminars, but luckily we spotted Graham, who was the regional representative for the south east of the HBA (We had attended some local HBA meetings) We had a coffee and a chat about where the HBA was actually going. I’ve been debating for a few years about pulling Bedrock out of the HBA. We’ve not had any dealings with the HBA head office, except for paying annual fees’ (that seem to increase), we spoke about if there was a purpose for the organisation, who seem to forever re-structure, but only ever appear to offer a conference and awards show. – It was nice to see Graham wanted to see the HBA change as much as I did.

Over lunch we furthered into talking about our stations, Lee had recently started helping out Jumbo Sound who where in dire need of engineering help and had got them in a position to be back ‘on-air’, Both Bedrock & Chelmsford had launched web streams last year as the stations both hit a 50 year anniversary.

So onto the AGM and conference, which i’d describe more of a membership grilling. It seem’d apparently that the chat with Graham earlier was echoed throughout various member stations. What where the HBA doing?
They announced a new-strcutrue plan, that would require volunteers to step up to help at national level, This wasn’t met with enthusiasm, it was clear volunteers at individual stations where fighting their own battles to stay afloat.

The plan it’s self, although longwinded, follow a suitable business model that have a board of Trustees that managed the charity and a board of directors that run the day to day of the HBA. However. the was a big catch, the Chief Executive post was one requiring a lot of travel to visit stations and representatives. but would remain unpaid (well except expenditure). In fact that was the downfall to the whole organisation. It’s run by unpaid volunteers.
–  A national charity representing Hospital Radio, don’t  pay member of staff. They just paid expenditures

It was suggested that maybe the Chief Executive post become a paid role, due to it’s intensive work,
Lastly a new website was unveiled, although had teething problems, it was a fresher(?!) look for the organisation.
Despite all this restructure and renewal I still struggle to see it’s viability. Many questions where fired around the room, but I had to ask “In today’s charity sector, with the stations individually fighting to stay open, could you justify if the HBA is viable”…. needless to say I didn’t much of a response, just ‘Yes, it is’… At this point I began to feel quite annoyed, partly as my question wasn’t answered fully, but in the other sense it answered itself. No. it’s not viable.
It needs dismantling and rebuilding.

If the stations are moving away from ‘hospital’ to ‘health’ then maybe the HBA needs to be more active in it’s support.
now this isn’t a HBA bashing post, no, I would like to see it become viable in my eyes. It has many avenues to do so.
but just hasn’t (maybe as the posts are unpaid?). If it was me, I’d have a dedicated studio built and produce interviews and other content for the stations, like a sort of youtube space for radio – stations could use the space for a small fee.
syndicated shows could be hosted from a central sever – rather than having dozens of links. Finally News, why not have a news service that maybe provides interviews with health ministers, or key health people,  (Maybe a partnership with IRN) to provide bulletins, but have the service provide news as mp3 downloads. (many softwares will update automatically) – Then you may have a fit for purpose – viable – national organisation.

After the whole weekend, Me and Lee know we’re going the correct direction, but work needs to be done at individual level to make any sort of widening listening base work, but it may require a total overhaul of the charitable guidelines.
and a general high level of standards

Maybe hospital radio isn’t the training ground it once was. It need to be tough enough to keep viable for the next 50 years… ‘local Health Radio’ appears to be a strong move. but how long for? 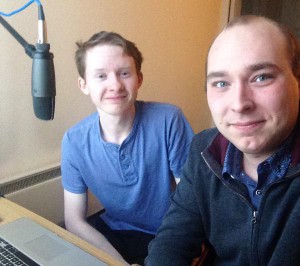 *On a sidenote, I’ve visited and listened to a handful of community stations, monitoring outputs to see how ‘community’ based they are, compared to a hospital station, on many occasions the hospital stations i’ve dipped into where providing just as much, or more relevant local information that some of these ‘community’ outlets offered.
I think that Hospital Radio stations (Well the good ones) should be given first refusal to any community licensing, as they often produce really good local information, with some even doing sports coverage too, additionally most of them have been operation or have a legacy of at least 50 years making them a good established ground to be offered a first refusal when the licences come up